The Three Peaks Challenge was borne out of a desire to recreate one of the many sportives we have done between us but with a twist, in keeping with our ‘punk’ attitude.  Having three local peaks on our doorstop which can all be interlinked by bike gave us a route but with the additional idea that there was no set route – riders were free to go whichever way they wanted depending on which route they thought was the quickest. Additional elements we wanted to add, from JP’s experience at the Transcontinental Race, were that riders would have to reach checkpoints where they would have to get something or do something to show they had passed by there en route. This brought in another element from another experience of ours at L’Eroica which was a brevet card, which riders would carry with them and stamp themselves at locations identified to the riders beforehand.

As we weren’t sure how many volunteers we would have and to avoid having people stationed at checkpoints waiting for riders to pass by, we would leave as stamp in each location and riders would need to stamp their own cards before moving onto the next checkpoint.

Ten riders had signed up by the published deadline and were sent the route in advance so they could plan their journey depending on what they thought was the quickest route. With a couple of morning cry-offs (a peek out of the window at the rain might have caused those), the remaining nine riders met at JP’s place at 8.00am for breakfast where JP gave everyone their packs containing their handcrafted numbers, brevet cards and prints and received a photo showing them where they could find the stamps en route. Riders then had to find the place depicted in the photo and locate the stamp. 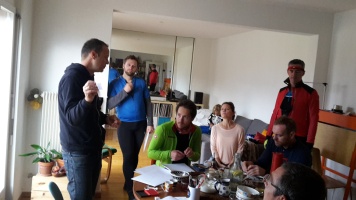 From 8.30am riders were free to leave, getting their brevet card stamped at the time they left, and from there they made their way around the course as fast as possible.

Although starting at different times, it want long before some caught up with others and either rode together or pressed on as individuals. Some going one way were passed by others going the other and with a few words of encouragement passed between them, in the most part! 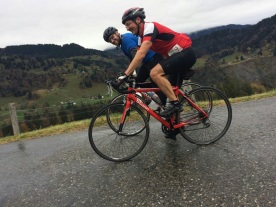 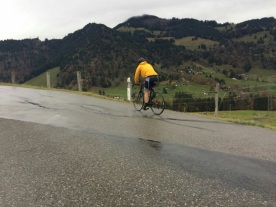 The beauty of this format is that no-one had any idea who had won because people started at different times and went different ways. When everyone had eventually got back to JP’s, except for Laurent who stopped off for a coffee and cake in Les Paccots to

warm up a bit and then stopped off at his house on the way home for a shower(!), we were treated to another awesome spread of homemade, organic food by Bex and Agata, before handing out the awards.

In true Vélopunks style, we not only rewarded the fastest time to Mr Thomas Chatfield, naturally with the album cover from Twin Peaks (not Three Peaks!) courtesy of VHS records in Vevey, but also the best photograph from the race which takes pride of place in being our featured image, courtesy of Mr David Fairweather.  Thanks to our other sponsors, Jordan Cycles and Kimera Coffee, we were able to give all the other riders some goodies to take away with them.

Thanks to all our runners and riders and breakfast makers. Your support is very much appreciated. VP.